Norwegian Wood is the first book of Haruki Murakami that I read, the first ever Japanese author I read. His works of fiction and non-fiction have garnered critical acclaim and numerous awards, including theÂ Franz Kafka Prize, theÂ Frank O’Connor International Short Story AwardÂ and the Jerusalem Prize, among others. Murakami has also translated a number of English works to Japanese. His notable works includeÂ 1Q84,Â Kafka on the Shore,Â Norwegian Wood, andÂ The Wind-Up Bird Chronicle.

The book has its own pace and is very different in the way the entire story is told and deals with friendship, love, sexuality and loss. 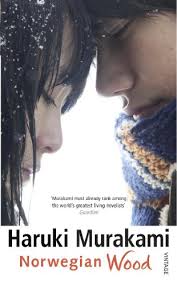 The book starts with Toru, reminiscing about his college days and his friends when Norwegian Wood, yes the song by Beatles, plays in the background. The book is about how a young, quiet and serious college boy copes up with the loss of his close friends. It is set in the 60s and has many references to the civil and student unrest happening in Japan during those times. Â The story is set in thriving Tokyo and also shifts location to a more relaxed mountainous retreat. The way the characters in this story are built up is really extraordinary.